Flora Indica Indian Restaurant on the Old Brompton Road is an intriguing mix of Victorian steampunk and classic English comfort. 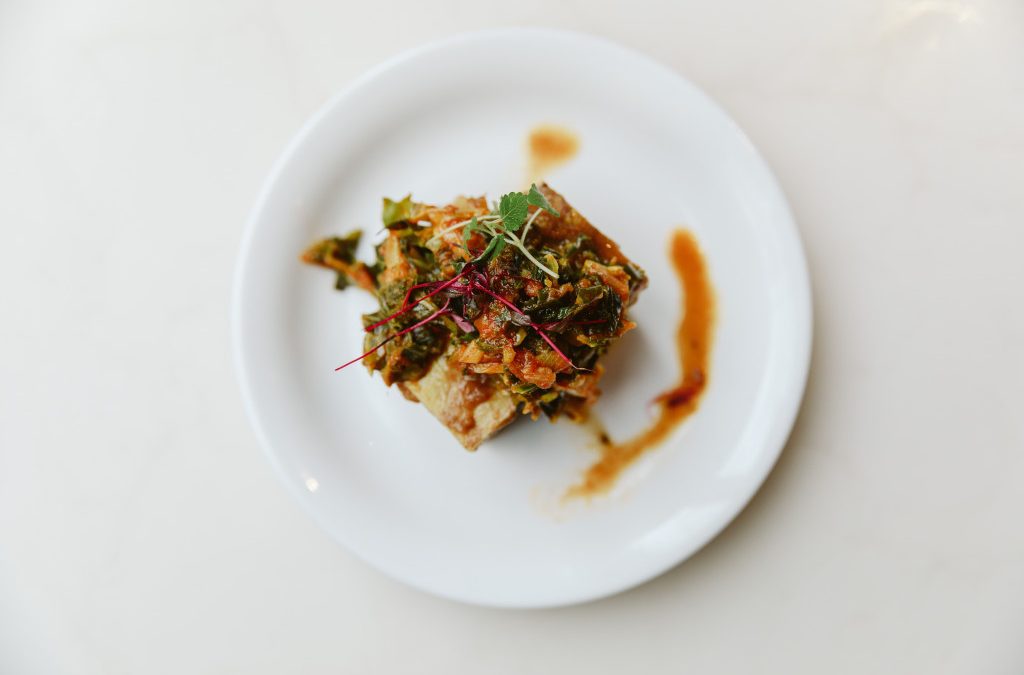 Billing itself as a ‘hypnotic hybrid of Victorian steampunk and classic English comfort’, Flora Indica on the Old Brompton Road sounds an intriguing combination, Mark Bibby Jackson finds out whether it delivers on its promise.

A maze of piping weaves its way down the stairs and into the room below, creating the effect that Flora Indica is part brewery-cum-distillery, which is the intention as the west London Indian restaurant brews its own craft ale and has an eclectic range of gins.

The Design of Indian Restaurant Future

Designer Henry Chebaane has successfully created a futuristic industrial design that is juxtaposed to the traditional flora Indica herbs that were reputed to be ‘discovered’ by a Scottish botanist. Copies of an Introductory Essay to the Flora Indica (1855) by Joseph Dalton Hooker and Thomas Thomson are littered around the restaurant if you wish to explore further, or impress your date with an in depth knowledge of Scottish botanists and Indian herbs.

Not that the design is totally futuristic. Harris tweed and snug bespoke leathers mingle with warming wooden floors and marble tables, ensuring a comfortable and sophisticated ambience.

The time simply flew past during our visit, only partially due to this being the first time I could catch up zoom-free with one of my best friends post-lockdown. We almost had to rush for the last Tube home!

The menu is equally innovative. Although before I attempt to navigate this, a bottle of the excellent Flora Indica, a smooth amber ale, is placed before me. Thirst whetted the serious business can commence.

Inspired by the discoveries of Scottish botanists, who trawled the Indian sub-continent for centuries to collect interesting botanica to spice up mundane British staples, Flora Indica’s menu provides a very contemporary twist to ancient flavours.

Jerusalem artichoke papdi chat sits next to a venison gilafi sheek and that is just for starters.

If you are looking for a chicken tikka masala Flora Indica is not the place for you. Instead Jerusalem artichoke papdi chat sits next to a venison gilafi sheek and that is just for starters.

We opted for the Jerusalem artichoke which was served in a tamarind and yoghurt sauce, together with a baby bitter gourd tak a tak which came with pumpkin kadi and toasted pumpkin seed. Having spent more than a decade in Asia, I am a big fan of a bitter gourd, and I was not to be disappointed. Its sharp flavour contrasted well with the slight sweetness of the tamarind of the complementary dish.

This we followed with monkfish and king prawn in a Bengali Malai curry sauce, and a bergamot lemon chicken tikka. My fish dish was exceptional, the monkfish was cooked to perfection with none of the toughness that can often disappoint. My companion praised his dish equally, but as a pescatarian I had to take his word for it.

We accompanied the dishes with plain rice and some fresh chilli and garlic naan that I found distinctly moreish, which is just as well because as my dinner companion is gluten intolerant so I had to scoff the whole bowl.

One of the most innovative Indian restaurants in London

Our desserts were an intriguing beetroot halwa with seasonal berries, and a fried brioche and tandoor pineapple dish which came with pistachio crumbs; the contrasting textures worked perfectly together. Kulfi can now be cast to the dessert bin of history.

Reassuringly Safe to Be In Doors

Flora Indica had only just opened its doors after the relaxation of the prohibition on indoor dining the previous day (17 May). It was reassuring to see that the seats were well distanced, and the staff all wore face masks. The former allowed us to catch up without fearing someone might overhear our mindless conversation, while the latter although making communication a trite difficult at times is basically the sign of the times.

As we were about to depart the manager informed us that Flora Indica is about to introduce bubbles of gin in special flavours including turmeric. Now that is another reason to make a repeat visit to Flora Indica, one of the most innovative Indian restaurants in London.