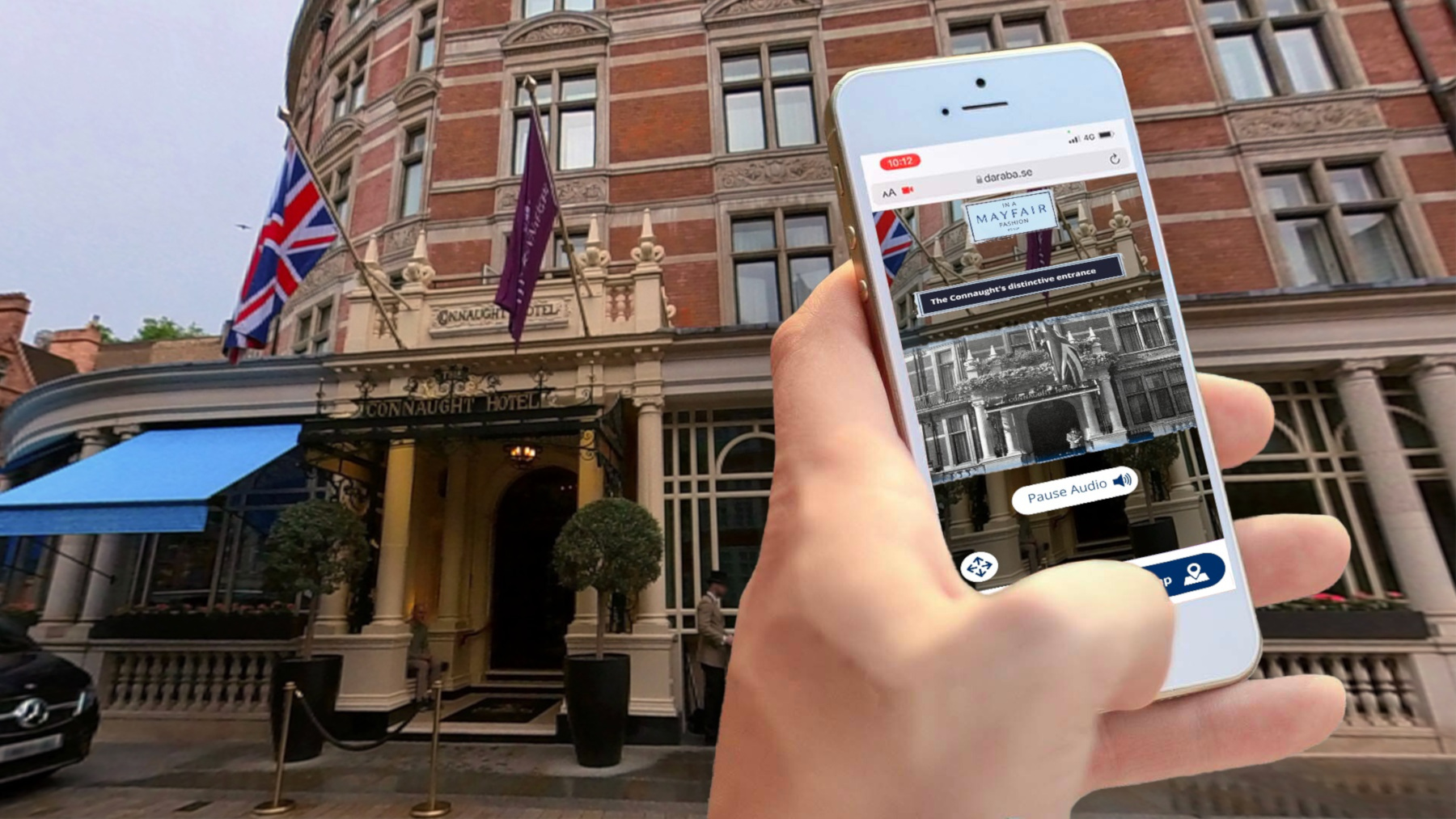 In a Mayfair Fashion is an exciting new Augmented Reality experience, led by Bridgerton star Kathryn Drysdale, which invites visitors to time travel in one of the most fabulously fashionable neighbourhoods in the world.

Launched 16 June 2022 visitors will be able to tour around Mayfair pointing their smart phones at its world-renowned hotels, townhouses, public spaces, gardens and squares and discover secret histories from duelling dukes to the origins of the Queen’s wedding flowers. QR codes across Mayfair will guide visitors to a web-based interactive map showing the location of the eight augmented reality experiences which reveal the secrets of Mayfair’s fashionable past.

Once users have arrived at the AR locations, they can launch the immersive experiences which overlay archive images and videos from the past in today’s locations, transporting the viewer back in time.

Once scanned, a web-based interactive map is launched and fashion fans can then click to reveal what happened in that space; who was where and how it all came together to build Mayfair’s reputation as one of the liveliest places in London.

Well known for her character’s fashion flair, Kathryn Drysdale from Netflix’s hit Bridgerton, is narrating the stories from across the iconic London locations. Like her Bridgerton character Madame Delacroix, Kathryn shares an interest in fashion, design and Mayfair’s secrets.

There are eight locations in Mayfair waiting to reveal their fashionable secrets. Highlights include The Connaught Hotel, Browns Brook Street and Mercato Mayfair. The tour begins in Grosvenor Square, the home of the Bridgerton family and a spot for Mayfair’s high society to see and be seen. Kathryn tells listeners of the 18th century elite, who brought their entire household (and personalised carriages) to the square’s townhouses for the season.

At The Connaught Hotel, users can align a silhouette on their mobile camera with the hotel’s grand entrance. Once in place the view reveals what the hotel looked like in 1911 when it opened. Kathryn informs visitors of the central role it played within Mayfair’s social season and of the glamorous balls and parties that kept the wheels of the marriage market turning.

At Mercato Mayfair, users can experience footage of high society weddings that took place in the building when it was originally a church used by well-known aristocratic families. The archival video shows the jubilant celebrations of the Earl of Harewood (cousin to Queen Elizabeth II) marrying the musician Marion Stein. In true Mayfair style, the bride wears a decadent embellished gown, made of white brocade with a silver spray pattern, offset perfectly by an embroidered veil.

For those who are not able to visit Mayfair themselves, a desktop experience allows users to learn about Mayfair’s fashionable history remotely. Clicking on hotspots within the map will allow them to listen to the audio tour and see the AR experiences as if they were standing in location.

Mayfair’s shops and restaurants are joining the celebrations with a range of offers and experiences for visitors on the tour. These include a meal deal from foodie market Mercato Mayfair, a special 10% off items purchased at luxury body care brand Bamford, fashion favourites J&M Davidson and super stylists Duck & Dry, as well as complimentary champagne at jeweller Annoushka and Duck & Dry.

The tour and AR experience was created and built by AR technology company Darabase and will be available until 30 September 2022.

Kathryn Drysdale says, “It’s been so exciting to be part of the In a Mayfair Fashion tour and help tell the stories of this area of London which I completely adore. Mayfair has such a rich and glamorous history and this project will really allow visitors to plunge into a nostalgic world of balls, fabulous parties and high society weddings, while also letting them make the most of Mayfair’s fun and fashionable present scene.”

To find out more about the event and Mayfair’s summer programme, visitwww.mayfairldn.com