Mark Bibby Jackson ventures to Little Kolkota in London’s Covent Garden to sample Indian tapas and emerges after a quite religious experience. 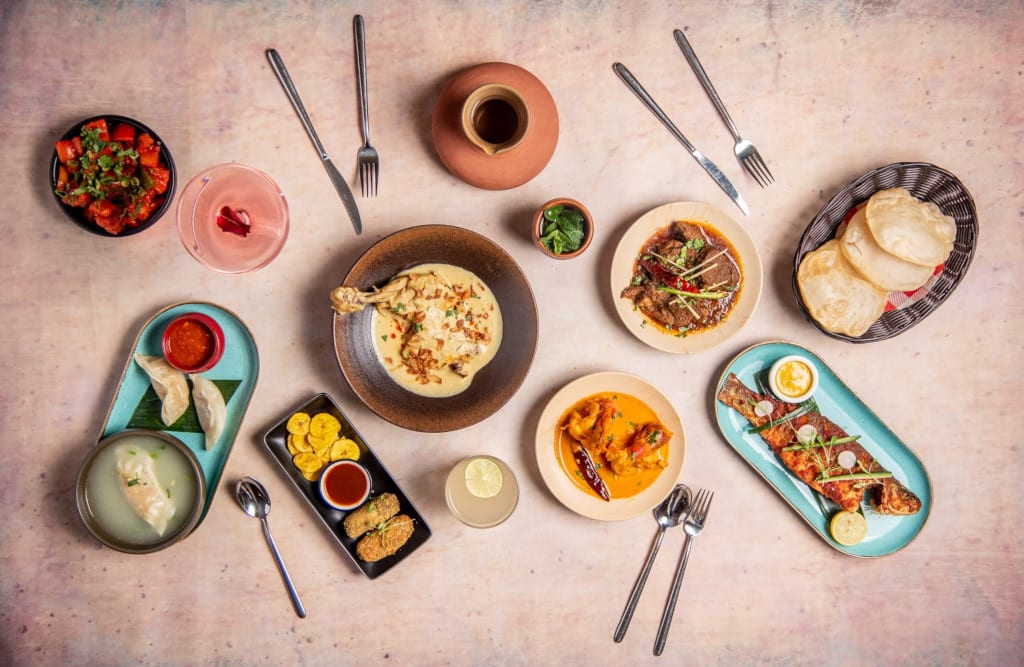 Mark Bibby Jackson ventures to Little Kolkata in London’s Covent Garden to sample Indian tapas and emerges after a quite religious experience.

Having spent many a year in Southeast Asia I am familiar with the concept of Asian tapas, but until being introduced to Little Kolkata, a canteen style restaurant in London’s Covent Garden, I had not encountered Indian tapas.

Why not? Few cuisines lend themselves to sharing as well as those of the sub-continent. Our family get-togethers often involve meeting at a local curry house and ordering far too many dishes that somehow become merged in the general melee.

This can present a problem, with you leaving not quite sure which spice belonged to which dish. This is where Little Kolkata comes in.

Established by Prabir Kumar Chattopadhyay and Biswajit Deb Das, who launched a series of Bengali supper clubs in 2015, Little Kolkata has an imaginative menu that suggests you order three to five plates per person. We managed to select eight between the two of us, no mean feat as one of us is gluten-intolerant and the other eats no meat.

The dishes come as ready, which means you can taste each individual dish before you move on to the next.

The first to arrive was the jhal muri, a hawker-inspired puffed rice dish swiftly followed by the singara chaat. These were sufficient to agitate our taste buds into action for the battle we were to commence.

For me the standout dish was the keema khichuri, served as a vegetarian option without the minced lamb. Prabir told us that this was his mother’s special recipe, typical of the food served at temples. His grandfather was head priest at Kalighat temple, Kolkata. It was by watching his grandmother and mother feed several thousand people each day there that the young Prabir was drawn to the power of food to do good. Certainly, it had me converted.

More vegetarian dishes were to follow, a mustard begun bashanti, sautéed aubergine served with a mustard sauce, without the grated coconut upon request from me, and a aloor dum and daal puri, baby new potatoes served in a tomato sauce; both of which were excellent.

In truth, by the time that my dinner companion’s chicken murgi Mughlai curry, which apparently was mild like a korma, and a mango aam fish, pan fried sea bass with a mustard sauce, arrived we were already struggling to get through our selection. At some stage some excellent whitebait arrived too.

However, after the non-keema khichuri, the best dish was still to make its appearance. Our waiter had tried to coerce me into order the truffle and cheese paratha, but as I hate all things fungi, I initially declined. After further prompting I relented and shortly four small paratha arrived, which I have to admit were quite divine.

Just like my recent dinner at the Grand Trunk Road part of the delight of Little Kolkata lay in exploring a menu that was highly original. Another was tasting the individual spices as they were intended to be by the talented chef. If your idea of an Indian is a chicken tikka masala washed down by a pint of Cobra, then Little Kolkata is not a place for you. Here they have a selection of craft ales, as well as a perfectly quaffable bottle of shiraz to choose from.

The service too, was excellent, knowledgeable and suggestive without being pushing, attentive without overwhelming.

I confess that not long ago I was despairing of the same-sameness of London curry houses, now after my experiences at The Grand Trunk Road and Little Kolkata, I feel the capital’s Indian restaurants are in safe hands. Now, all I have to learn is to order less dishes next time.