The iconic Notting Hill Carnival returns bigger and better this year over the August bank holiday weekend as usual. Starting with the Panorama event on the Saturday, Sunday is family day, and the main parade brings the carnival to a grand climax on August Bank Holiday Monday.

Both 2020 and 2021 Notting Hill Carnivals were turned into a virtual event due to COVID-19 measures.

The Notting Hill Carnival is Europe’s largest free street festival and a culinary spectacular. As one of the best things to do in London in August it is a vital date in the diary for any Londoner and visitor to London. Featuring a spectacular parade that showcases London’s rich and varied multicultural heritage with masquerade bands, steel bands and samba bands as well as live music stages, sound systems, children’s activities, and an array of great Caribbean food stalls to choose from.

The London carnival is an inclusive, community-lead celebration of Caribbean culture and the effect the Windrush generation and larger local community has had on Britain. 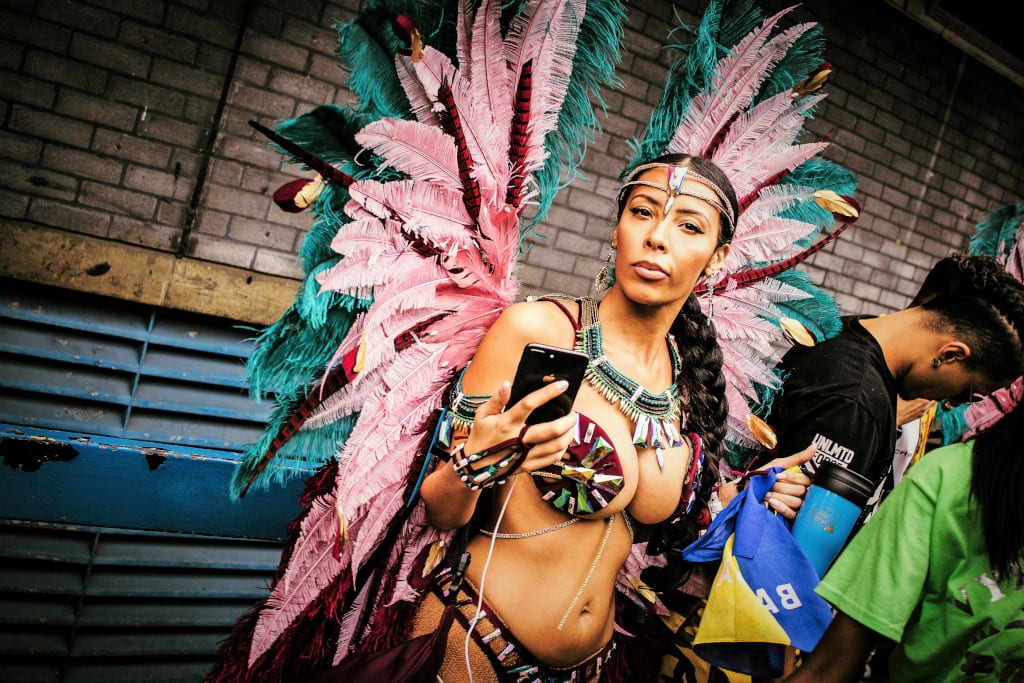 Held on 28 August from 6pm to 7pm, and one of the largest steel pan competitions outside of the Caribbean, the Panorama National Steelband Competition sees bands play a ten-minute composition from memory – no sheet music is allowed for the crown at Emslie Horniman Pleasance Park. Children’s Day traditionally takes place on the Sunday with special participation for children and more. This year, organisers say there will be an increase in children’s bands and more family friendly options. Monday is the Notting Hill Carnival itself.

An estimated two million people descended upon Notting Hill last year – only Rio’s carnival is bigger. Around 38 sound systems will play all genre of music from reggae to house, from blues to afrobeats and almost everything in between.

The Notting Hill Carnival is not the only music celebration in London this August, read about the EFG London Jazz Festival Summer Stage at Royal Albert Docks.

Where is the Notting Hill Carnival?

The London Carnival spreads across the streets of west London around the W10 post code, with celebrations spreading over Notting Hill, Ladbroke Grove and Wesbourne Park. The main parade (on the Monday) begins on Great Western Road, then chugs its way along Chepstow Road, before spreading out on to Westbourne Grove and finally heading off to Ladbroke Grove. Westbourne Park and Ladbroke Grove stations are the nearest stops on the London Underground, but check out on logistics before you set out as stations might close or become overcrowded.

The London carnival has three stage: The Horniman’s Stage, Powis Square Stage, and the Meanwhile Garden Stage, which features kid’s entertainment. For more information on the live stages, click here.

The first carnival was held in 1966, when social worker Rhaune Laslett, who lived in Notting Hill, organised an event for kids. However, the origins of the carnival stretch back to 1959 when the BBC broadcasted a Caribbean Carnival from the town hall at St Pancras, which was organised by Trinidadian human rights activist, Claudia Jones. Similar indoor events took place in halls around London in the 1960s. In 1966, Laslett invited well-known musician Russell Henderson and his band to play at the carnival. Already popular among the Caribbean community, the band wove its way through Portobello Road, and as a trail of locals followed them dancing in the streets, the Notting Hill Carnival was born. You can read the whole story of how the Notting Hill Carnival came to be here.

Can’t make this carnival, then try our round-up of the best carnivals around the world.

This year’s London Carnival will be from 27 August to 29 August , 2022. It is always held on the August bank holiday and is an unmissable event if you’re looking for things to do in London in August.

For a map of the Carnival area and the parade rout, click here. Please note this is the 2017 route.

The Notting Hill carnival is one of the top events for music in London. For details of the Live Stages at the London Carnival, click here.

What is a Mas Band?

At the heart of the parade, Mas Bands are where themed costumes meet music, dance and spectators. Taken from the word ‘masquerade’, the mas stem back to the 1800s and the emancipation of slaves in the Caribbean. Slaves would mimic and ridicule their masters, copying the elaborate gowns they would wear at balls, combining these with elements from their own African traditions, such as costumes made with bones and blue devils playing music from tin.

For details of Mas Bands, Steel Bands and Brazilian bands performing at this year’s Notting Hill carnival click on the appropriate words.

Further information on the Carnival

For more information and regular updates on the Carnival, click here or here. All photos from Notting Hill Carnival Trust, c. Niall Green from Seven Screens Pictures. For more festivals in London in August, or London festivals any other month of the year try visiting our Festivals in the UK page.