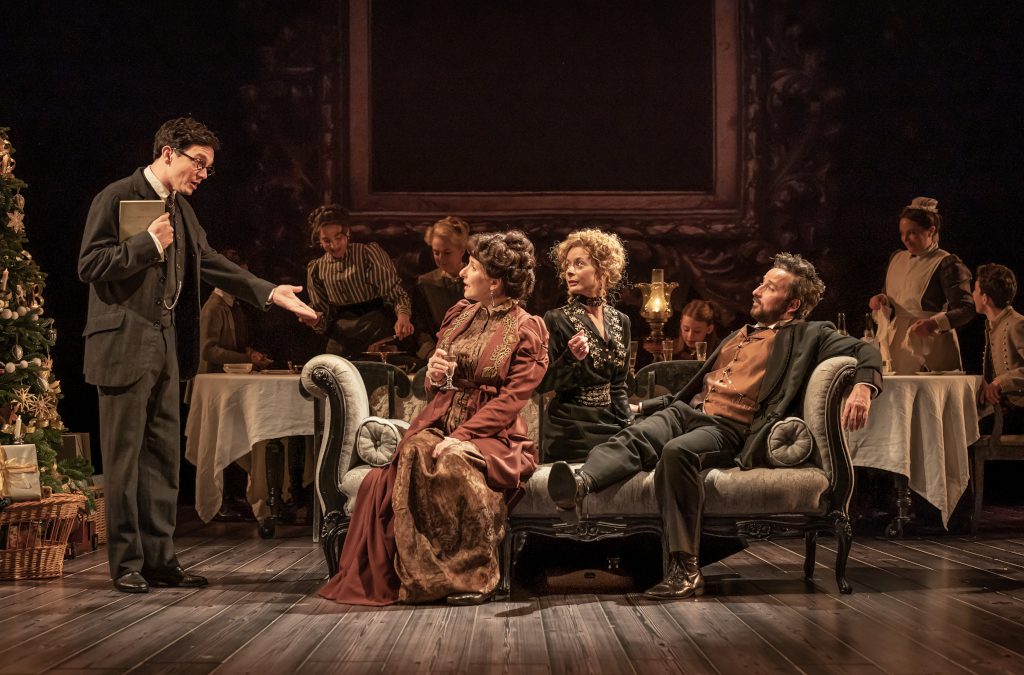 Leopoldstadt is, in Tom Stoppard’s own words, “all about being Jewish” – this means identity and the fragility of life in a mainly non-Jewish society. The story he tells so compellingly through stage images and word craft is of a large Jewish family living in Vienna through six generations, ending in the 1950’s. Tenderness, devotion, suffering, robust intellect, debate and humour are all conveyed as family members come to life and the dramatic narrative unfolds.

In Leopoldstadt Stoppard pays “homage” to his Jewish origins and the persecution of the Jewish people, especially under the Nazi regime. He only discovered his Jewishness when approaching 60. This play, his most personal to date, resonates with the growing racial divides in the world today. And, he has said, this will be his final dramatic offering.

Born in Czechoslovakia as Tomas Straussler, the future playwright was brought up from the age of eight in England by his mother, Martha (by then ‘Bobbie’) newly-married to a British army officer, Ken Stoppard. Within three months he took his step-father’s name. Martha never spoke of the past.

Having fled Czechoslovakia in 1939 with her husband, Dr Eugen Straussler, and their young sons Peter and Tomas, they made their life in Singapore for a few years until Straussler was killed by a Japanese bomb. Three years later Martha married Maj. Stoppard and the family of four moved to Nottinghamshire. Tom and Peter became English boys – prep school, cricket, manicured lawns, and all – ignorant of their parent’s history.

In Leopoldstadt Stoppard creates the fictional Merz and Jakobovicz families linked by marriage. But he also uses the odd story gleaned over many years of painstaking research into his own roots. And at the end of the play with just three family members having survived the Holocaust the young man visiting Vienna from England is surely the playwright himself.

Leopoldstadt opens at Christmas in 1899 on the eve of the new century with all the Merz’s and Jakobovicz’s gathered together. It’s a busy upbeat scene with a lively buzz. This is a prosperous, contented family. Children run about excitedly carrying gifts from the festive dining table and placing them underneath the massive Christmas tree. The final decorations are added, including a misjudged golden Star of David atop the tree – misjudged since Hermann Merz had converted to Catholicism and married a Gentile. The star was hurriedly taken down… Yes, a complex family situation. “We are Austrians!” declares Hermann convincing himself that this solves everything.

The years tick by. Hermann’s wife, Gretl – admirably played by Faye Castelow – has an affair with a young Austrian army officer using her portrait-sitting appointments as an excuse to rendezvous with the caddish Fritz. The difference between Jewish and Gentile comes to the fore when Hermann challenges Fritz to a duel and is refused on the grounds that it is expressly forbidden for officers to fight duels with Jews. Hermann’s shock and silent humiliation – a foretaste of the horrors to come – is movingly expressed by Aidan McArdle whose portrayal of this empathetic character throughout the play is outstanding.

Leopoldstadt is a beautifully-crafted play and the production (director Patrick Marber) does it justice.

It’s a massive undertaking – a cast of 46 – masterfully handled by movement director Emily Jane Boyle. The set (designer Richard Hudson) is simple, consisting of two dark furniture pieces: the dining table and the grand piano: they feature in every scene though they become increasingly bare and unadorned. It’s an imaginative touch to indicate the declining family fortunes. Effective also is the fast-changing projection of sepia photo-images of Vienna before each scene and there’s the music too: sometimes Klezmer, sometimes contemporary Austrian.

Go and see Leopoldstadt – it will remain in your memory for a long time.