Mark Bibby Jackson reviews Josh Azouz’s tragi-comedy Once Upon a Time in Nazi Occupied Tunisia at the Almeida. 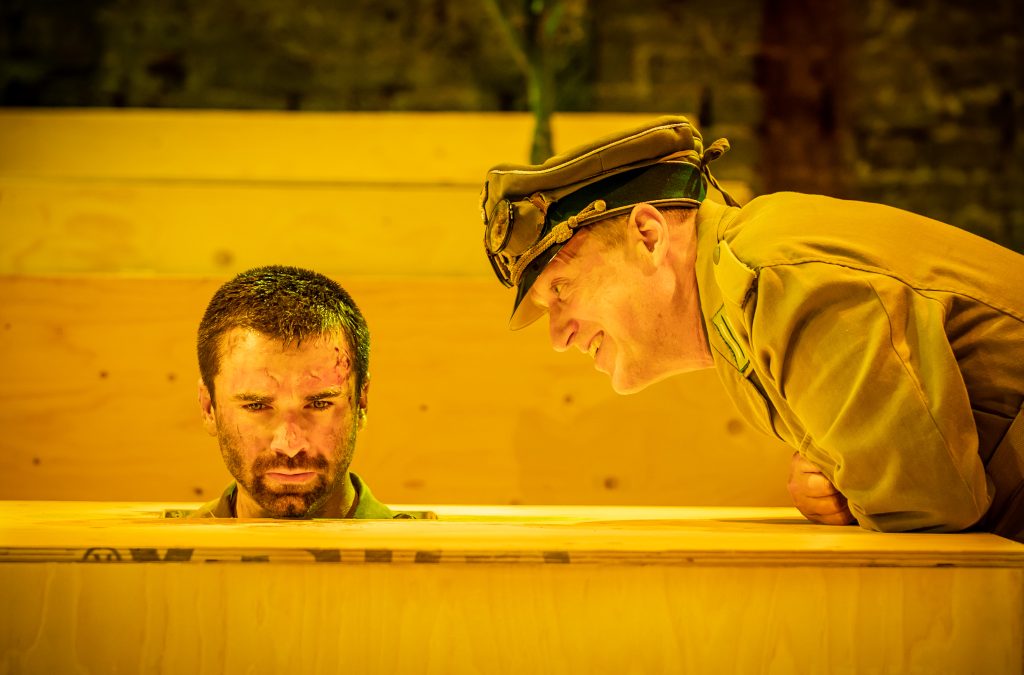 Mark Bibby Jackson reviews Josh Azouz’s tragi-comedy Once Upon a Time in Nazi Occupied Tunisia at the Almeida.

From the off as we are greeted with a character buried up to his neck in sand while his best friend debates whether he should carry out his orders and urinate on him, Once Upon a Time in Nazi Occupied Tunisia grips the viewer.

The world premiere of Josh Azouz’s darkly comic play at the Almeida reminds me of what I have missed most during lockdown – challenging and thought-provoking drama – sorry but Netflix just doesn’t fit the bill.

Once Upon a Time in Nazi Occupied Tunisia is set in 1943, four months after the Nazi regime occupied the North African country in retaliation to the Allies invasion of Morocco and Algeria. I freely confess this is a part of history that had passed me by before watching the play.

Victor is the poor unfortunate in a labour camp, his friend Youssef, the one who must decide whether to urinate. To piss or not to piss, you might say.

One is Jewish the other Arab.

Therein lies the main issues considered in the play. To what extent we will compromise our own morality when confronted with extreme evil, as well as the nature of our own prejudices. And to what extent will we go to survive – Victor begs his friend to urinate in his mouth as he is dying of thirst.

Directed by Eleanor Rhode, the set is austere yet excellent. At first I am disappointed, as if it had been designed by Ikea, but soon realise the raised platforms allow excellent viewing throughout, without becoming a visual distraction to the drama.

The opening scene has more than a distant echo of Beckett, which suits the tragi-comic tone.

At the centre of everything, is Adrian Edmondson as the Nazi officer Grandma. Edmondson has come a long way from playing Vyvyan in the Young Ones, but here he reprises the role that gave him initial fame. For there is far more than a hint of the vicious punk in his performance. But this is to denigrate his acting which is finely nuanced and provides an energy and a vibrancy to the play. Quite simply the play is more gripping when he is on the stage.

That is not to say the other performances are lacking. Pierro Niel-Mee as Victor provides some lovely tragi-comic moments, Ethan Kai gives a strength to his role that underpins the work, and Yasmin Paige as Loys is excellent as she combats moral questions that nobody should ever face, as well as choosing between the two men she loves.

Ultimately Azouz raises questions rather than providing us with answers, but surely that is the role of the playwright? At times the play did tend towards long intellectual debates, but these were swiftly undercut by tragi-comic notes.

The scenes when Grandma visits Loys for dinner and its aftermath are handled excellently, mixing intellectual discourse with comic absurdity.

Once Upon a Time in Nazi Occupied Tunisia handles issues such as race, identity and gender stereotypes with a careful eye, but ultimately it is a tale about survival.

Once Upon a Time in Nazi Occupied Tunisia plays at the Almeida Theatre until 18 September. Details of how to purchase tickets can be found here.