Eileen Agar: Angel of Anarchy at the Whitechapel Gallery London highlights one of the most important artists of the twentieth century. 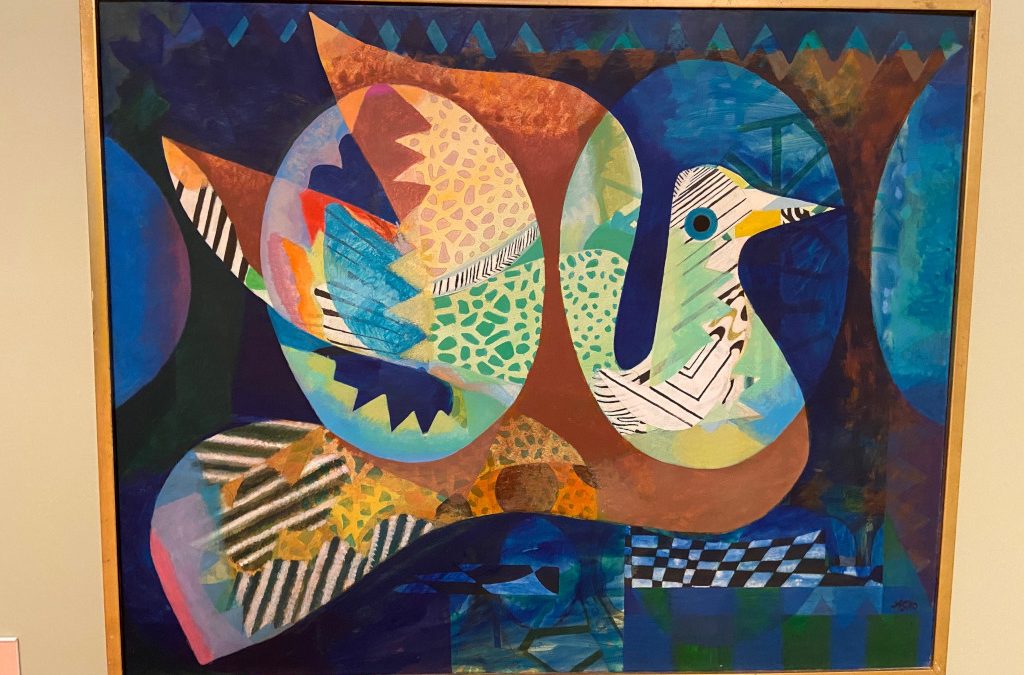 The Whitechapel Gallery’s exhibition of the work of Eileen Agar – Angel of Anarchy – highlights both the longevity and variety of one of the most important artists of the twentieth century, writes Mark Bibby Jackson.

The exhibition charts her work from encountering Surrealists such as André Breton in Paris in the late twenties to her discovery acrylic in the sixties. It features her sculptures – one of which is the Angel of Anarchy – as well as collages in addition to her paintings.

Eileen Agar and the Surrealists

Agar (1899-91) was born in Buenos Aires to a wealthy family, but sent to England for her education. In 1921 she joined the Slade School for Art before travelling to Paris at the end of the decade. It was here that she discovered the Surrealist movement as well as being trained in Cubism.

It is this marriage of influences that is most in evidence in the ground floor Gallery 1 at the Whitechapel Gallery. Agar was drawn by the sensuality and irrationality of Surrealism, as well as the idealism and logic of Cubism. Attracted to the desire to paint from the subconscious, Agar wanted to incorporate a Cubbist appreciation of form to her work.

In 1936, three of her paintings were selected for the International Surrealist Exhibition in London, and she was immediately labelled as a Surrealist herself, much to her surprise. However, Agar did not appreciate the way that male Surrealists treated women. Her paintings suggest a fluidity of gender. This can be seen in works such as The Modern Muse (1934).

Nowhere is the prevailing attitude towards women – not just within the Surrealist movement – more evident than in the British Pathé video of Agar wearing a ceremonial hat for eating bouillabaisse (1948), which as inspired by her mother. Not only is the commentary quite priceless but the design of her hat is wonderful. The final design is now in the Victoria and Albert Museum (V&A).

The video appear upstairs in Gallery 9 along with a selection of Agar’s collages and assemblages where the natural world features strongly. Agar would wander through forests and beachcomb for resources to use in her work. She visited Ploumanach, France in 1936 where the rock formation there had a distinct impact upon her. It was also at this time that photography played a strong part in the creation of her works.

The final gallery is devoted to Agar’s post-war experimentation and love of nature. In 1953 she went on a holiday to Tenerife which revitalised her work, which had struggled during the Second World War and its aftermath.

It is now that her work blurs the distinction between collage, painting and drawing, within a Surrealist landscape. A great example of this period is her spontaneous painting of John F Kennedy, entitled Apocalyptic Head (1963) inspired by the president’s assassination.

The last part of the exhibition shows Agar’s later works which involved acrylic that the artist found to be a very flexible medium.

Agar said that, “Life’s meaning is lost without the spirit of play.” It is this which shines through in her work.

When visiting the Angel of Anarchy, you might also wish to pop in on the free exhibition devoted to some of the women involved in the Surrealist movement – Phantoms of Surrealism.

Tuesday to Sunday, 11am to 6pm; First Thursdays, 11am to 9pm. Closed Mondays.