We are all seeking fresh ideas for day trips from London, but sometimes it turns out that what you are looking for has been around for centuries, as Mark Bibby Jackson discovers on his 1066 Country Day Trip.

We are all seeking fresh ideas for day trips from London, but sometimes it turns out that what you are looking for has been around for centuries, as Mark Bibby Jackson discovers on his 1066 Country Day Trip.

Here is our selection of Sussex castles you can easily reach from London.

Built in 1380-85 for Sir Edward Dallingridge, Bodiam Castle has always been more a ceremonial castle than a battle-worn one. Although it was built during the 100 Years War possibly to prevent an invasion, Bodiam was designed with all the mod cons of the times including fireplaces and even internal lavatories. Blackadder would have felt most comfortable here.

Time did not serve the castle well and it fell into disrepair until it purchased by Lord Curzon in 1917, and subsequently restored. He bequeathed it to the National Trust, who still own Bodiam Castle, in 1926.

It is due to the generous Lord that the castle has its romantic air. You sense that if Cinderella and Prince Charming were to run off to Sussex, this is where they would settle. The portcullis is the oldest dated one in the country, although the one at the Tower of London could well precede it. The spacious grounds invite a picnic.

Herstmonceux Castle is the oldest brick house in the country, or so they say. Built in the 15th century, it is now used as study centre for Queen’s University, Canada, but the grounds are open to the public.

Its 300-acre estate includes a few ponds, woodland, formal gardens and a folly. Not to mention the peacock.

The Elizabethan Gardens were created in 1570 and lovingly restored from 1910 by Claude Lowther. This is where the peacock resides. Nearby, the Apothecary Lower Gardens support a population of bees and butterflies.

But it is the mock-Georgian Folly built from 1933 to 1946 by Sir Paul Latham that is most intriguing. Resembling a Hollywood movie set, behind its façade lies a walled garden full of mystery.

1066 Battle of Hastings, Abbey and Battlefield

We couldn’t conclude our 1066 Country day trip without a visit to 1066 Battle of Hastings Abbey and Battlefield. After all this is where history began, at least as taught at my school.

Like the other two castles, Battle is perfect for those who wish to keep their visit out in the open. The route takes you from the 14th century Great Gatehouse to the battlefield where the Norman troops of William and the Saxons of Harold clashed.

Some dispute whether the Battle of Hastings was fought on this site. However, historic records indicate that William I wished to build an abbey on this site as a form of penance for the 5,000 soldiers who lost their lives during the fighting. The current 13th century abbey replaced the original church that was built here in 1095. It too is now a ruin. There is also a plaque to signify where Harrold supposedly got an arrow in the eye.

Places to Stay in 1066 Country 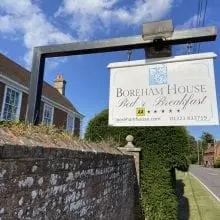 Although you can visit any of these castles on a day trip from London, if you wish to make a weekend of it, we recommend you stay at the excellent Boreham House – we did.

The Grade II Georgian house was built in 1796 in the village of Boreham Street. It has great views of the High Weald and a walled garden to challenge Herstmonceux. Owners Sara and Simon Parker have introduced stringent COVID-19 measures to ensure the safety of all guests, are extremely knowledgable about the area, and serve a great breakfast.

For more information on our chosen castles click on the appropriate link.

Still stuck on ideas on what to do in 1066 Country? Go to the informative Visit 1066 Country website.

Main image courtesy of English Heritage. All other images unless stated by Mark Bibby Jackson.

David Hockney: The Bearable Lightness of Being